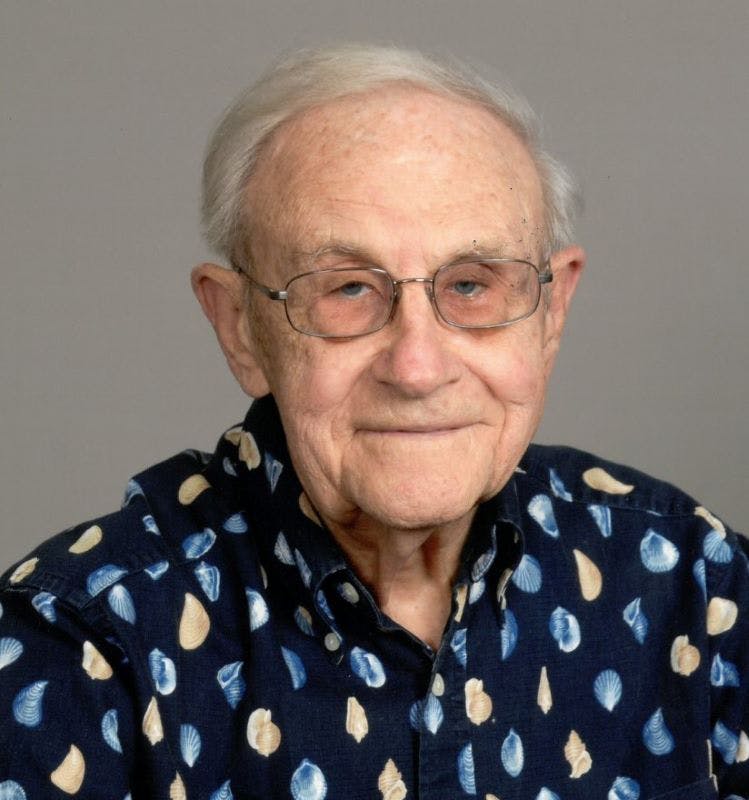 Sheldon Ray Flowers, peacefully passed on November 26, 2021.  Sheldon was smart, kind, generous, loving and openly displayed his devotion to God, his country and his family.  Sheldon is survived by his three children, Leslie Wilcoxon, Nancy Burns and Mike Flowers, as well as his seven grandchildren and seven great grandchildren.

Sheldon was born in Havensville, Kansas to William and May Flowers on May 11, 1923.  Sheldon, along with his younger brother, Lloyd, was raised in town and attended Havensville High School, where he was valedictorian.  Upon graduation he enrolled in Washburn University before entering the United States Navy.  Sheldon served on the USS Tripoli during World War II in the Pacific Theater.  As a naval officer, he was able to attend Harvard business school, from which he proudly graduated.  Sheldon's first job post-Harvard was with Proctor and Gamble.  Proctor and Gamble proved to be his lifetime career, and he kept many great memories and friendships made with the company.  He, thankfully, met Wilma Dunbar after his career with Proctor and Gamble took him to St. Louis.  They married and settled in Wyoming, Ohio.  Sheldon retired in 1987 as Director of Employee Relations and the couple remained with family in Cincinnati, splitting with time in Sanibel, Florida.

Sheldon is fondly remembered for his quiet sense of humor, gentle manner and leadership, both professionally and with his family.  He was truly selfless in his ways.  He was noticeably humble and openly grateful for the course his life took.

The always dapper, Sheldon, had an unrivaled love and beautiful marriage with his wife, Wilma.  We remember the contagious warmth and joy felt when in the presence of their love.  Sheldon was a lover of all sports, especially basketball.  Thankfully, his personality won out as he invited Wilma to their first date, with a wing man, to a basketball game.  Wilma, also very patient, was not a fan of basketball, so it is said luck was on his side that day and the courtship was successful.  Deservingly, Wilma held his heart for the remainder of his life.

Sheldon's joy was his family.  He was a doting father, grandfather, great grandfather and uncle.  His family remains immeasurably grateful for his devotion to family as they have remained close throughout their lives.  Sheldon was truly patient with, and devoted to his family and literally could not speak of a family member without cracking a loving smile.

Sheldon also frequented Sanibel Island, Florida, and resided there for a time.  Many memories were forged in Sanibel, not only for Sheldon, but his family as well.  The white sand and abundance of sea shells kept Sanibel close to his heart, which was evident as he traveled to Sanibel up to the age of 95!  He loved walking the beaches and shelling, and diligently collected the best specimens to keep, always with an eye out for a coveted Junonia.

Forever proud of his service, it should be mentioned that Sheldon was honored by his opportunity to serve in WWII.  He often laughed at himself as he was sea sick the entire time on the ship, yet turned down an opportunity to serve on Coronado Island to remain with the men he had been serving with.  He finished his time sick, but loyal to the men on the ship.

Sheldon was openly grateful for the opportunities that were given to him, rather, created by him, throughout his life.  He was especially grateful for his time at Proctor and Gamble.  It is his long career with the company that spawned many lifelong friendships and a poker game that ran for many decades.

Sheldon was an example of faith to his family and his community.  Sheldon's Cincinnati years were spent with Wyoming Baptist Church.  The loving support system and friendships proved to be immensely important to him, and he was faithful to serve as well.  He served on boards and committees with the church.  He was notably a Deacon and a Sunday school teacher. Wyoming Baptist Church was a true foundation in his life of faith.

Gratitude and thankfulness are words too small to describe how we reflect on our time with him.  Sheldon will always be remembered with full hearts as he left his family and the world better than he found it.