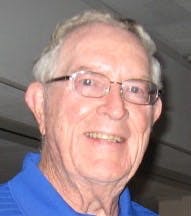 Mark A. Krabbe (86), loving husband of Joan (nee Buehler) Krabbe, passed away peacefully at Hospice of Hamilton, January 18, 2021. Mark was born in Cincinnati, Ohio, on September 29, 1934, the son of Joseph and Dorothy (nee Schaefer) Krabbe. On August 5, 1972, he married Joan Buehler at Queen of Peace in Hamilton, Ohio. They had two sons, John Mark Krabbe of Liberty Township, OH, and Raymond Krabbe (Jennifer nee Weathers) of Hamilton, OH. Raymond and Jennifer blessed Mark with three grandchildren, Leeanne, Alexander and Anthony Krabbe, who were the light of his life. Mark’s parents and only sister, Joan Krabbe, preceded him in death. He was also preceded in death by sisters-in-law Virginia Boerger and Mary Buehler; and brothers-in-law Clarence Boerger, Raymond Buehler, Orville Buehler, Roman Buehler, and Leo Buehler. He was blessed with five brothers who remained a great joy in his life. He is survived by his wife, sons, and grandchildren. He is also survived by his brothers Joseph (Sandra), George (Donna), Chris (Nancy), Larry (Sandy), and Giles (Carol) Krabbe; brother-in-law John Buehler (twin of wife); sister-in-law Dorothy Buehler; and countless nieces and nephews.

Mark received a Master’s Degree in English Education and a PhD in Curriculum and Education from Ohio State University. He spent his life as an educator and administrator, both in high school and college. He was a high school teacher in two Ohio Catholic schools and a principal at one in Canton, Ohio. He spent more than thirty years at Miami University where he taught and prepared students to be secondary teachers. He was a model of good teaching, and because of his staunch values, an ethical presence to his students and co-workers. His dedicated service for the welfare of the disabled and his drive to research and publish led to full professorship at Miami. He personally chaired four campaign levies of Developmental Disabilities 1974, 1977, 1979, and 1984 and served on the Board of Butler County Developmental Disabilities for many years. His penchant for leading others resulted in the success of one of the leading programs for developmentally challenged individuals in Butler County. He proudly guided his own developmentally challenged son to succeed in difficult circumstances, such as completing vocational high school, working a regular job at Kroger for eight years, and learning social graces in public situations. His generosity to others was significant to the extent of opening his home to the Notre Dame Tabernacle Society to provide Mass vestments, vessels, and religious goods for missionaries for more than seventeen years. He will be missed by all the lives he touched.

Visitation will be held on Monday, January 25, 2021, from 10:00 a.m. until time of the  Mass of Christian burial 11:00 a.m. at Queen of Peace Parish. Interment to follow at Millville Cemetery. In lieu of flowers please consider the Notre Dame Tabernacle Society, P.O. Box 6, Ross, OH 45061 or Queen of Peace Church. Sympathy may be expressed at www.springgrove.org.