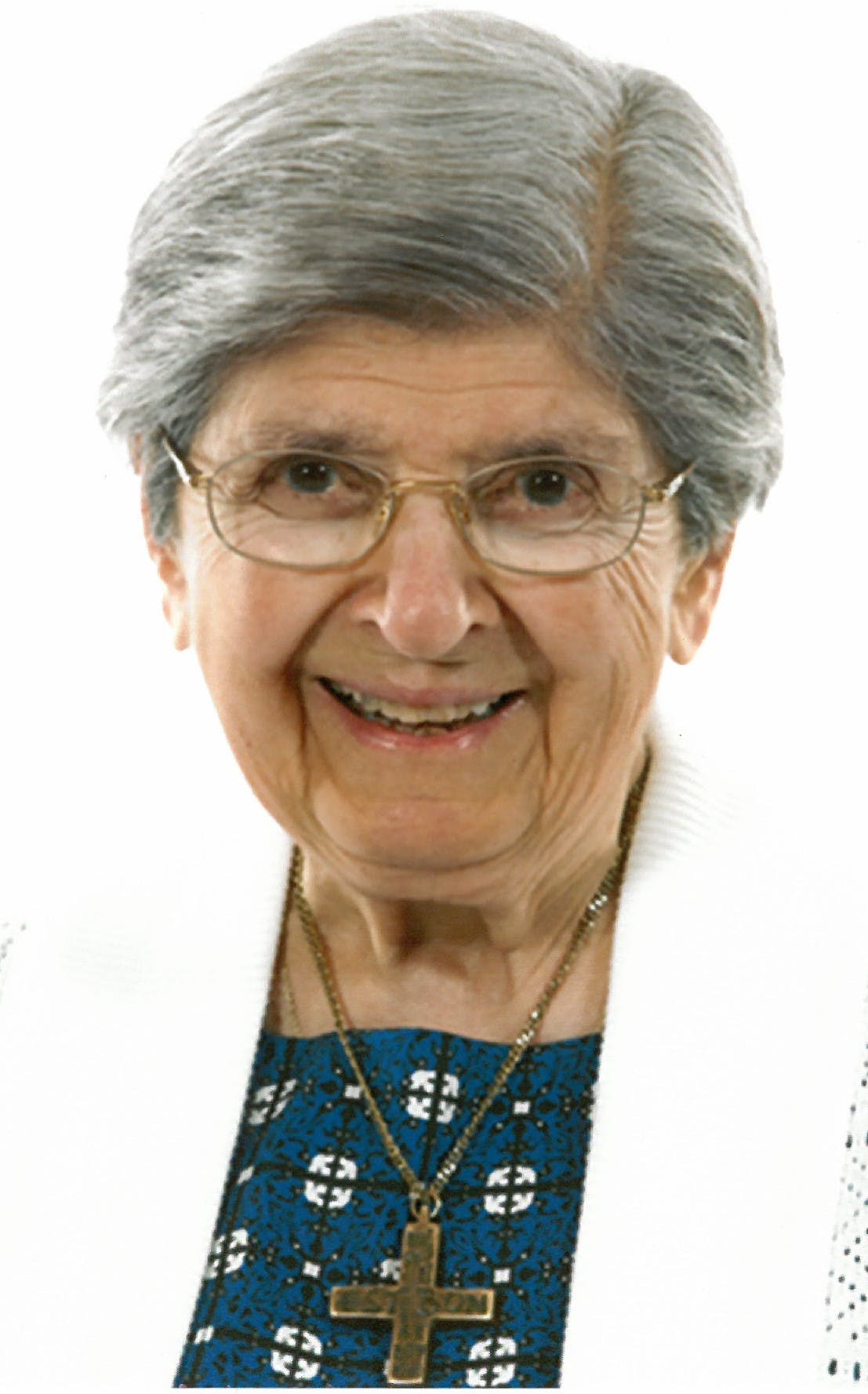 We must not give religious instruction to our children without having meditated in the presence of God upon what we intend to teach them. (Themes: Instructions of St. Julie Billiart, page 80)

Marie Gloria Andary was born in a small town along the Ohio River just five miles from Wheeling, West Virginia. Her parents were immigrants from what is now Lebanon and both belonged to the Lebanese Catholic Rite, so the family attended the Lebanese Rite when it was available, and the Roman Rite when it was not. When she was nine, Marie's father moved the family to Dayton, Ohio where he worked as an insurance salesman. There they became members of St. Agnes Parish. The Sisters of Notre Dame de Namur staffed the parish school and would be Marie's teachers through the rest of grade school and high school.

By the time Marie finished high school, she knew she wanted to join the Sisters of Notre Dame. Her father asked her to work for two years after which if she still wanted to enter, her parents would support her decision. Marie went to work at Grandview Hospital as a stenographer in the summer of 1941. When the United States entered the War following the attack on Pearl Harbor, Marie was hired as a secretary at Wright Field. She worked there until July of 1943 when, with her parents' blessing, she entered the community. One of the biggest surprises for Marie was how insulated the Sisters were from the reality of the War. She felt the lack of radio and newspapers keenly and looked forward to letters from her brother who was serving in the military. He kept Marie posted on what was happening in the outside world and the constant stream of letters assured her that he was alive and well.

On her application she said she wanted to "help others through prayer, sacrifice and counsel." Later Marie would say that at that time she "wasn't specifically thinking about being a teacher but must have assumed that would happen." By the time she finished her novitiate and made her

first vows as Sister Agnes Gertrude, she knew she would end up in the classroom. She thought she would finish her studies first, but a teacher was needed immediately, and so Marie began her 23 years of teaching 2nd through 8th graders. She would later remember how very difficult she found teaching because she was not prepared for it. Marie would add that she learned to be an effective teacher through the example of other Sisters, good supervision and her studies, but it was not a ministry she found personally fulfilling. Marie shared that she felt her gifts became useful and her ministry fulfilling when she began to work with adults. It was her work in school administration, religious education, office management and as receptionist that brought her both joy and fulfillment.

Going through the transitions in religious life and the church before and after the Second Vatican Council was not easy for Marie. She would honestly say, "Change is difficult for me." She would also say, "Faith is strong and resilient through every year." Some changes Marie gladly embraced because she could see they improved the quality of community life and effectiveness in ministry. Others she needed to "live into." It did not help that Marie was serving as both superior of the local community and principal of the school. Education was changing as fast as the Church and she found herself constantly dealing with challenges and change on every front. Marie clearly recalled the first time she went to Mass in contemporary dress. A fellow worshiper reached out to her with the delighted greeting, "Welcome to our world!" Marie was grateful that the Diocese where she was living quickly initiated an educational process to introduce the faithful to changes in the Liturgy and in Theology. Participating in the process helped her embrace the changes more easily. Along with everything else, religious instruction in the classroom changed and it became more and more difficult to find textbooks that carried the heart of the Gospel message. Marie began to wonder if her skills would be better used in religious education.

Marie took courses to renew her own theology and accepted a position at Immaculate Conception Parish where she was to coordinate religious education programs for students in public grade schools, high schools and adults. She found the lack of both resources and support for the program difficult. As Marie looked for other ministry possibilities she was directed to the Director of the Office of Religious Education for the Archdiocese of Cincinnati. She was hired on the condition she would begin working toward a degree in Religious Education and was assigned as the Religious Education Consultant for the Hamilton Deanery. Marie was delighted! She was the low-key, organized, creative person needed to serve as resource person for 25 parishes - several of which did not have schools and very few of which had paid, full-time Directors of Religious Education. Marie offered Sacramental preparation programs to be incorporated in schools or CCD programs. She also provided in-service programs for parish staff and volunteers, including a 'mini-Congress' each August for catechists. Marie attended to the need for resources by obtaining a grant from the Knights of Columbus that allowed her to purchase filmstrips and other audio-visual materials. These she organized in a lending library for the parishes and schools. Marie loved the people she was working with at the local and diocesan levels, but after seven years the travel began to wear on her. She accepted a position at St. Charles that focused on just one parish with an integrated approach: she was to coordinate Religious Education for the whole parish - including the school. Marie enjoyed the challenges of her work, took great satisfaction in it, and felt strongly supported by her peers as well as those to whom she ministered.

By 1993, Marie's widowed mother was 89 and in need of some help to allow her to remain in her own home. Marie left St. Charles and joined other Sisters of Notre Dame de Namur in the Alliance for Work Based Education program at the University of Dayton. The program helped adults work toward their GED and gain computer skills. Marie managed the office and helped coordinate the services of the program. It was flexible enough that she could see to her mom's increasing needs. At the same time she involved herself at Our Lady of Mercy Parish by serving on the Outreach Committee and helping to provide luncheons after funerals. She also served at the Assumption Parish Food Pantry. After her mother's death Marie made the decision to move to Mount Notre Dame in Reading, Ohio. There she served as part-time receptionist in the Province Offices providing a calm, quiet, professional presence answering the phone and greeting visitors. Marie also kept the Sisters in Marian in the loop by providing them with printed copies of information disseminated electronically.

In community Marie was quiet, soft-spoken, direct, an eager and prepared participant in discussions, an excellent listener, a "prayer-sister" and mentor for many. She was introverted but also people centered. Marie looked forward to faith-sharing opportunities, community Liturgies, and all ongoing formation programs. She stayed connected to community through the years of caring for her mother, joining a local community on Friday night and staying until Sunday evening. Marie became the motivator for simple but fun activities on the nights she was present. She enjoyed reading, cooking, gardening - both indoors and out, card games, relaxing music, good movies, interesting conversation, hiking, picnicking, boating, tennis, and any excuse to spend time near a body of water. Marie's favorite season was spring because of its new life and beauty. She enjoyed travel and for many years looked forward to annual vacations with two SND friends. Marie felt deep connections to her Lebanese roots and her most memorable experience was a trip to Lebanon that allowed her to visit extended family and the childhood home of her parents. She followed news about Lebanon closely and kept the country and its people in her prayers. Marie loved opportunities to participate in Lebanese Rite worship, Lebanese food and cultural experiences - especially if she could share them with family members.

Marie was part of a close and loving family. It was a heart-ache for her that she, the oldest child, outlived all of her siblings. It was a joy for her that she could be such a part of the lives of her nieces, nephews and their families. She loved days spent baking together, outings, visiting, phone calls, letters, family celebrations - any and all connections with her family. Marie was so proud of each family member. We are all grateful her family members could make 'compassionate care visits' during Marie's last months in spite of the pandemic.

In a 2015 interview Marie shared, "I have grown in appreciation of the spirituality of our co-foundresses and the freedom of spirit they had which was continued in the lives of the sisters who came to America. I'm also proud of the growth of the congregation and in its organization. We seem to be one, especially in these days of instant communication. I can truly say I am proud and happy to be an SND." Her Sisters say how happy we are that she has joined so many other Sisters of Notre Dame de Namur and her family members in Heaven. We, with her family and friends, feel the void her passing leaves in our lives. We give thanks for the gift of God's goodness she has been to each of us and ask her to continued prayers until the day we drink the fruit of the vine with her and the entire Communion of Saints in Heaven.

Baptized December 16, 1923 at Our Lady of Lebanon, Wheeling, West Virginia