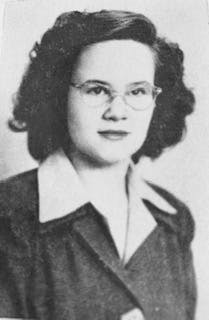 Kay C. Bridenbaugh, at the age of 92, shuffled off this mortal coil and into heaven on April 10, 2021. Dorothy Kathleen was born to Dorothy and James Conway on June 26, 1928, in Winner, South Dakota; the first of three daughters.  Katie grew up in small-town Nebraska (which she would say is redundant), where her father was the school superintendent and a coach and her mother a teacher;  the family later published the local newspaper, the Spalding Enterprise.  Perhaps that is why her vocabulary is legendary, as are the stories about how and when she wielded those words, often ones the dictionary labeled "archaic."  She was also a devout Catholic, and lifelong Democrat, feminist, book lover, and fan of cooking everything well-done. Kay received her undergraduate and first master's degrees from the University of Nebraska, and liked to share that she and Johnny Carson were Cornhuskers together.  She started her work life as a typesetter, then teacher, and married recent Nebraska medical school graduate Phil Bridenbaugh in 1957. Over the decades, as the family moved to Washington state (twice), California, England, and finally to Cincinnati, Kay was PTA president, League of Women Voters officer, Scout leader, pretty good amateur weaver, earned an MBA from XU, worked in banking and for the IRS,  and really grew to appreciate a good single-malt scotch. She leaves behind her children; Sue Murphy (Mike) of Houston, Tom Bridenbaugh of Cincinnati, and Dan Bridenbaugh (Katie) of San Antonio; grandchildren Matt and Kevin Murphy, and Norah, Jack and Lee Bridenbaugh; her sister, Sharon Conway Crowley of Apache Junction, AZ; nephews Steve and Mark Allen of Omaha; and a very nice loom.  Kay will be put to rest near her parents in Spalding.  In her honor,  the family encourages you to renew your library card.