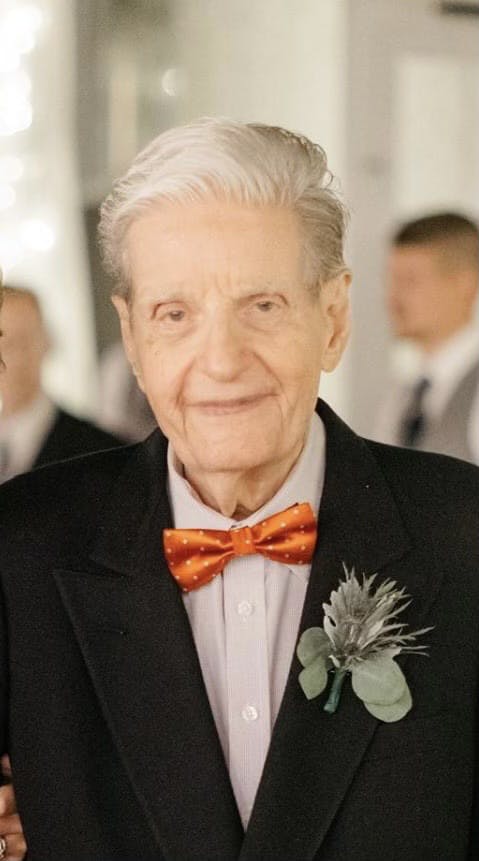 John Gilbert Premo, loving father, grandfather, uncle and friend, went home to be with his Lord and Savior on October 27th, 2021. John was born November 14, 1927 to Alexander and Edna (Masterson) Premo. Considered by many to be a miracle baby of his time, he was only three pounds at birth and three months premature. They lived together in a two-bedroom Murphy bed apartment in Chicago, Illinois. An only child, his father’s carpentry work took them to many different states and John transferred in and out of many different schools. His mother would work tirelessly to help him keep up with his school work.

He was drafted into the Army at the end of WWII and served fourteen months. This enabled him to go on to college via the GI bill.  After college, he attended night law school and worked for Nalco Chemical Company as a patent attorney for most of his adult years until his retirement. During his time with Nalco, he taught himself organic chemistry and began to submit ideas for new products. His first invention netted eleven million dollars in sales for the company and he went on to secure several patents to his name. In his final years as Chief Corporate Patent Counsel for Nalco, he traveled quite often to Europe to manage company interests. Several years after retirement, he was elected to the President of the Intellectual Property Law Association of Chicago.

He married Jean Tennyson Craig in 1954 following a two-year courtship. They grew up across the street from one another and reconnected years later at a Young Republicans Club meeting. Jean was a tom boy as a child and the family often chuckled over being told that John’s mother did not want him to play with her because she was too rough.

John and Jean raised one daughter and two sons together. They lost a second daughter, Peggy, to a tragic accident when she was five years old. They never truly recovered from her loss, but carried on and served their family well.

An avid reader, John also loved woodworking, gardening, travel, tennis, golf and bridge and enjoyed many wonderful summer vacations with family in the North Woods of Wisconsin boating, skiing, swimming and fishing. He also enjoyed many years taking part in church theatre productions and singing in the church choir.

Retirement was spent traveling all over the world with Jean, enjoying hobbies and visiting children and grandchildren. He loved DIY projects and could often be found in his well-equipped workshop tinkering with new ideas and inventions.

John selflessly cared for Jean in her later years until her death in 2012 and in 2013 married Margaret Sullivan, a long-time family friend. John and Margaret enjoyed a number of good years together residing in Evanston, Illinois and wintering in Sarasota, Florida.

His last few years were spent with his daughter and her family In Cincinnati where he took part in welcoming many great grandchildren into the family and entertaining all with his wit, wonderful sense of humor and beautiful singing voice.

He was a good friend to many, a devoted husband, and a loving father and grandfather. He loved lending a hand to friends and neighbors needing help with household repairs and was always willing to help those in need. He was most generous and had a tender heart for those who struggled to make ends meet. Tears would often fill his eyes when commercials featuring those struggling to survive were aired.

John leaves behind his three children, Mary Pat (John) Grossmann, Thomas (Jamie d. 2019), and James (Janine), fourteen grandchildren and seven great grandchildren. He will be deeply missed by them all.

A Celebration of Life service will be held Friday, November 26th, 10:00 a.m. at Grace Evangelical Free Church, 605 Meadowcrest Road in Cincinnati. Memorials may be given to the Gary Sinise Foundation for wounded veterans, garysinisefoundation.org or to the Eve Center, a no cost Christian counselling center for woman, evecenter.org.