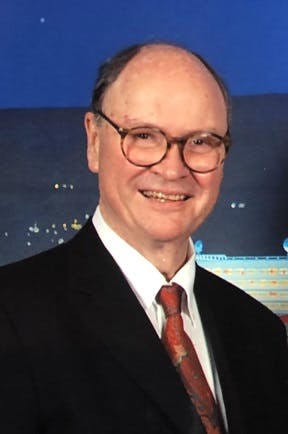 Jeremy “Jerry” F. Simpson. Known as “Uncle Jerry” by many. Passed away Tuesday, December 22, 2020, at the age of 88. Jerry was born in Cincinnati to Lowe and Mildred Simpson. After his mother’s passing at an early age, he grew up with his father, his Uncle Ted and Aunt Lu and his two cousins, Trez Folger and Lucy Folger Lawson. At age 25, Jerry began his tenure as CEO of the local company – Rotex. He was a 4th generation of Simpsons to run the company that he spent over 40 years of his life growing and improving. He was stalwart for countless charitable causes in the Greater Cincinnati area and his legacy will live on through his family, friends and the many endeavors he generously supported. His passion for making meaningful connections with and among his family and friends was unwavering. Jerry will be forever remembered for his thoughtful acts, stimulating conversations, sense of humor and affinity for the vibrancy of Greater Cincinnati. Due to COVID-19, a private graveside service for Jerry will be held at Spring Grove Cemetery at the convenience of the family. A celebration of his life will take place at a later date. In lieu of flowers, memorial contributions may be given to the LADD, Inc. 3603 Victory Pkwy, Cincinnati, OH 45229. Sympathy may be expressed at www.springgrove.org. Arrangements entrusted to the Spring Grove Funeral Homes-Elden Good, 513-853-1035.