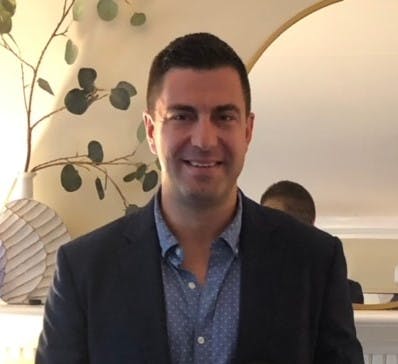 Jamal Jonathan Shteiwi left a hole in this world when he passed on November 9, 2020. For his short 39 years of life, he was exactly who we all knew him to be; a tenacious, fun-loving, joyfully stubborn, and trusted friend. His giggle and gregariousness will be greatly missed. Jamal harnessed his competitive nature and quick-thinking skills into a successful career as a commodities trader at Geneva Trading, based in Chicago. It was a career that provided him the luxury of focusing on what he loved the most: his family and friends. He was fiercely protective and devoted to his wife and children. Though only 39 when he passed, Jamal had been with his high school sweetheart, Lauren Russell Shteiwi, for almost twenty-five years. The through-line of Jamal’s life was his love for Lauren. She was the center of his universe and had been since they were fifteen years old. Jamal leaves behind four beautiful children: Will (11), Maya (9), Eliza (7 going on 17), and Juju (5). All of his children exhibit some of the best of Jamal, especially his tenacity. His eldest, Will, is likely to be the spitting image of Jamal in three-to-five years. Will inherited Jamal’s athleticism and unflappable disposition. Maya, his elder daughter, inherited his quick wit, joy and sarcasm. Eliza, his third child, is a firecracker and inherited his spunk. Juju, his youngest, inherited his kindness and soft side. Jamal is also survived by his parents (Diab and Cindy) as well as his three siblings: Jomana (Eric) Dobbs, Jibran (Rasha) Shteiwi, and Jennifer Shteiwi. The Shteiwi family shares a strong bond and Jamal was particularly close with his cousins Rula (Dave) Louis, Lana (Dan) Wright, Yousef Shteiwi, and Mera Shteiwi. His in-laws (John and Sandy Russell) thought of him as one of their own, in addition to Col. John (Marschell), Dr. Scott (Jen), Dave (Renee), Luke (Ellen, Mark), and Adam (Mary Beth). Jamal was the fun-loving uncle to 18 nieces and nephews who he loved dearly, frequently letting each of them know that they are champions, who can never be stopped. Jamal’s character, personality, and quick wit made it easy for him to expand his relationships into his friend’s extended families. He was considered an integral part of the Dobbs, Thompson, and Koch families, amongst many others. Jamal is often associated with his numerous athletic accomplishments at Summit Country Day and the University of Kentucky. He will also be remembered for his Freddie Mercury stage presence. Despite all his impressive athletic achievements, including a 2004 All American selection, MAC Player of the Year (2003 and 2004), all-time points leader at Summit Country Day, and 200m record holder at Summit, he would want it to be known that he had a single-digit golf handicap and that he was undefeated in EZ Ryder Cup match play. At the end of the day, Jamal was just a good family man and great friend to many. He will be greatly missed by the many communities in which he was involved, including those of Summit Country Day, Mariemont, Cincinnati Country Club, the University of Kentucky, and the BWGC. Due to the current pandemic, services honoring Jamal will remain private. In lieu of flowers we invite you to donate to the Go Fund Me established to support his children’s education, which can be found at: https://www.gofundme.com/f/shteiwi-education-fund.

Services will be private per the family’s request.