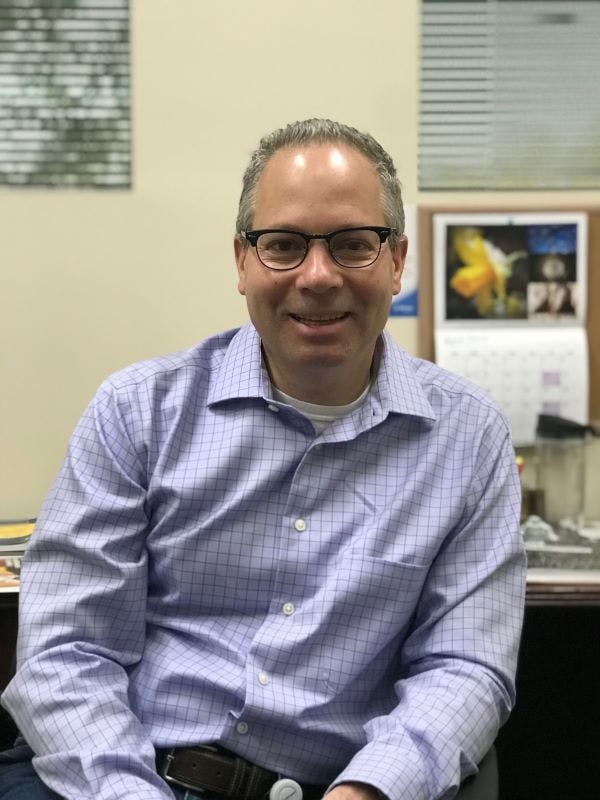 Jerry Szczur, beloved husband of Kathy Szczur, passed away peacefully on Tuesday, June 8, 2021 at the age of 55, after a well-fought, 22 month-long battle against bile duct cancer.

In lieu of flowers, donations may be made in Jerry's memory to The Cholangiocarcinoma Foundation (https://cholangiocarcinoma.org),  The Gang of Seamstresses (provider of port access shirts - Greene Giving - 941 West 2nd Street, Xenia, OH 45385 with "Gang of Seamstresses" noted in the memo line) or to Hospice of Cincinnati (hospiceofcincinnati.org).

If you met Jerry, chances are, you would not be forgotten. He was just that kind of guy.

Jerry grew up in the small steel town of Johnstown, PA. He was the youngest of 4 children. His childhood was filled with adventures around town and in the foothills of the mountains.  He started his schooling at the Catholic school associated with their parish, St Casimir's, but after the flood in July 1977 kept his school closed, his mom transferred him to the public school system. Jerry attended Penn State University studying chemical engineering, following in his oldest brother Bob's footsteps. He graduated in 1987 and moved to Cincinnati to try and find a job as the economy in Pennsylvania was rough.  His first real job out of college was working at Candle-Lite manufacturing.  He learned a lot and met some nice people, but the location in Leesburg, OH was what drove him to look for another position.

His next job was at Medisorb, a small, privately owned pharmaceutical company based in Blue Ash, OH. This would be the start of his life-long career in the pharmaceutical sciences field. He learned the ropes quickly and became an integral part of the company.  It is here where he met Kathy, his wife of 30+ years.

He stayed in the pharmaceutical manufacturing sector in the Cincinnati-area, working for one company as it was bought and became another company. Worried about the physical toll on his health, he left the corporate world to start a home remodeling business with his oldest brother, Bob, in 2005. This business was tough, but he loved it.  Jerry was a very talented guy in many ways. He was able to get an electrician's license with the state of Ohio based on his education and experience. The demise of this venture was the recession of 2008.  He kept the business going for another 2 years, then decided to close it. It was at this time he applied for a job at Forest Pharmaceuticals and it changed his life.  He met some great people and learned a lot.  His hard work and people skills cemented his place in the company, until it was acquired and he chose not to relocate to New Jersey. Jerry and Kathy made the decision to stay in Cincinnati to help support his mom, who had moved from Johnstown, PA, a few years prior and be there for Kathy's aging parents, as well. At that time, he was finishing up his MBA in finance from Miami University. He took a few months off to spend time with his mom, then went back to work.  He spent time at the pharmaceutical companies, Aprecia and Patheon, then was able to go back to Allergan (which was now the company formerly known as Forest). He was happy to be back and continued his work, first as Director of Engineering, then Director of Manufacturing. He knew everyone at the Cincinnati site on a first-name basis, whether you were a first-shift or second-shift operator or mechanic or contract worker.  He was just that kind of guy. He took the time to get to know his co-workers and worked hard to earn their respect. He didn't like to be called a boss or manager. His response to that was that a manager "managed" projects, but a leader "leads" people.  He really prided himself on that.

In March 2019, he was chosen to become the leader of the entire Cincinnati Operations site.  He was so excited and ready. Allergan had been acquired by Abbvie and that transition was almost complete. He was feeling tired and run down, but figured it was work.  He was working long hours and trying to position the site favorably in the sights of the new senior leaders at Abbvie. He had his annual physical in mid-July.

Jerry was formally diagnosed with bile duct cancer in August 2019. He began treatment as soon as physically possible. He continued to serve as site director until June 2020, when he stepped back to focus on healing. He worked really hard in trying to eradicate the cancer from his body, but it is an aggressive and rare form. Each treatment wore out his body just a little bit more until what was considered a mild treatment pushed his body to the brink. He was hospitalized in mid-May for 9 days, then spent the last 3 weeks at home under Hospice care, with Kathy, Katie and David taking care of him. He was determined to recover from the atrophy as a result of the hospitalization, but it was hard. He wanted to launch some model rockets as a family, so David took care of the logistics, tracking down the appropriate engines and parachutes and recovery wadding, and over Memorial Day weekend, the family went to Keehner Park and launched some rockets. It was a glorious day with blue skies and a few clouds.

Jerry was supported by a great team of doctors and nurses and associated healthcare personnel throughout this journey. He endeared himself to everyone he met by being himself and respecting people. When he was in the ICU, almost every member of the interventional radiology group came to visit him, even though he was out of it. He was just that kind of guy. He knew the oncology pharmacist at the Kenwood infusion center and the transport personnel at Bethesda North hospital. He became fast friends with the nutritionist at Kenwood and the chaplain he met on his first day of treatment. He was just that kind of guy.

Jerry was a "home body".  He loved staying at home, working around the house, being in his workshop tuning up his equipment or working on his latest woodworking project or sitting on the patio with a drink.  He loved his "Patio Fridays".  He would have some vodka & tonics with a lot of limes and just chill out, reflect on the week past and plan for the weekend ahead.  It was his break between the work week and the weekend.

Saturdays would begin with his coffee and sweet treat.  He would gather those then go to the family room and watch a little TV.  In the early years, it was cartoons, "This Old House" or "The Woodright Shop", then he found "The Rifleman" on AMC.  He would watch 2 episodes, then get on with his weekend projects.  Kathy did not really have a "Honey-Do" list for Jerry because he would identify or create projects to do around the house.

The house was a major sense of accomplishment for Jerry.  For those of you who were around at the beginning, you know the house had a lot of issues.  A lot of sweat equity was put into the house, but the work was done right, because Jerry did it.  Jokes were made about the poor souls who might inhabit the house after Jerry & Kathy because they would never be able to easily "undo" any of the work that had been done.

The biggest source of pride, besides his family, was his workshop and his projects.  His workshop is meticulous, the machines are tuned to precision and he could tell you where anything was.  Jerry was self-taught and he loved creating a piece from a rough-sawn piece of lumber.  His favorite projects were the custom master-bath vanity cabinets he made from rough-sawn walnut and his Shaker reproduction clock.  He loved going to Shaker Village outside of Lexington, KY, to admire their handiwork and glean ideas about design and function.

As previously mentioned, his family was his biggest source of pride.  He was a great husband and father, son & brother.  It is said for women to pay attention to how a man treats his mom because that is an indication of what kind of person he is.  Kathy didn't have anything to worry about.  Jerry loved his mom and was a source of hugs and humor for her, especially after she moved down to Cincinnati to be closer to Jerry & Bob.  Jerry & Kathy would have celebrated their 31st wedding anniversary in October.  Jerry referred to their partnership as the "K & J team" and they were a team, from Day 1, in everything they did.

An off-shoot of the "K & J" team are Katie & David.  Jerry was a great dad and teacher to each of them.  They are different people and Jerry nurtured them as individuals.  There was a lot of humor in the house and one of the biggest sources of pleasure was hearing stories of Jerry's childhood.  In fact, during the last weeks at home, old cassette tapes were played from when Jerry was a kid.  There were memorable vacations to places like Colonial Williamsburg and Outer Banks, and short jaunts to Shaker Village and Columbus.  Probably the most memorable were just the afternoons spent at Sharon Woods or Keehner Park or sleeping in a tent in the backyard after eating smores from the fire pit.

Jerry had to identify 4 pillars in his life for a class for his MBA.  One of those pillars was FAITH and he had a strong faith through to the end. Unless we heard the unequivocal answer "NO" from God, he continued to pray for a miracle. He was never angry or questioned "Why?".  He wanted to be "the best patient" and so probably never truly let on how much pain or discomfort he was experiencing.

Jerry will be missed terribly. His humor, his smile, his woodworking talents, his generosity, his warmth - all contributed to making the world a better place. Now, he is making heaven a better place.