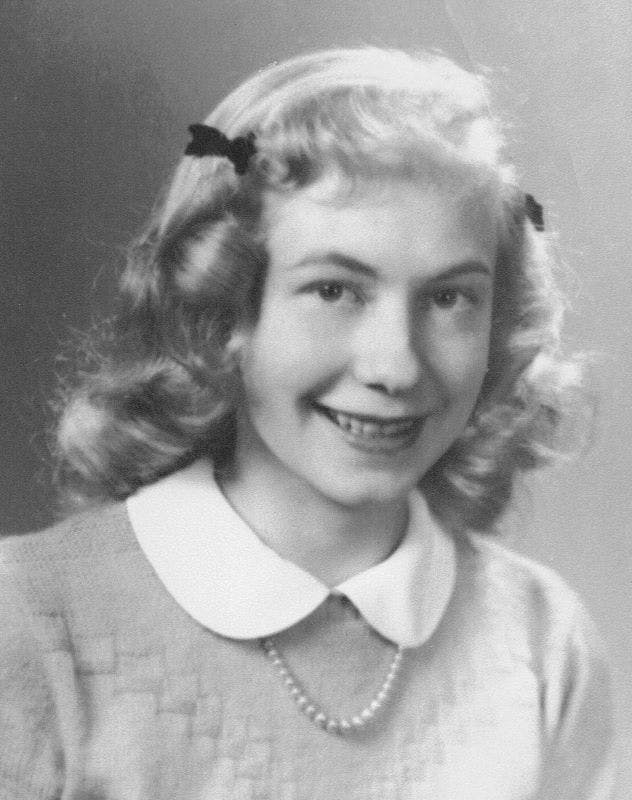 Doris June Brigham Austin died on August 9, 2021, in Kettering, Ohio. Doris was born on January 6, 1931, in Cincinnati, Ohio, the youngest of four children and the only daughter of Charles Albert Brigham, Sr. and Dorothy Duke Brigham. Although coming of age during the Great Depression and WWII, Doris had an active and happy childhood, and fondly remembered many good times with family and friends. During her junior year at Walnut Hills High School, Doris met Myron ("Monk") Austin, which began a five-year courtship. Doris matriculated at the University of Cincinnati majoring in Home Economics, where she was a proud member of Alpha Chi Omega sorority. Doris and Monk were married on October 18, 1952, while both were students at UC. They lived and raised their children in El Paso, Texas and the Chicago suburbs, then moved to Florida before returning to the Cincinnati area for their retirement. Doris was an accomplished seamstress, cook, and gardener. She loved reading, puzzles, and games, and was an avid genealogist. Over the years she and Monk also found time to raise pets, travel, and enjoy life. Doris possessed an abiding belief in God and the power of prayer. She was an active member of The Church of Jesus Christ of Latter-day Saints, and Doris and Monk were sealed for time and eternity in the LDS Atlanta temple on October 25, 1985. Doris' primary vocation in life was as a wife, mother, and grandmother. She instilled in her children a deep sense of faith, love of learning, gardening, cooking, animals, and culture, as well as an appreciation for the dignity and rewards of work. Doris was preceded in death by her husband, Myron; parents Charles and Dorothy Brigham; two brothers Charles Albert Brigham, Jr. (Al) and Robert Willard Brigham (Will); and two grandchildren, Alexander Austin and Carol Bukas. She is survived by her four children June Austin, Susan Bukas (Randy), Daniel Austin (Wendy), and Barbara Austin (Charles Grogan); brother Robert Walter Brigham; seven grandchildren James Bukas, Abigail Bukas (Scott Swatosh), Thomas Austin (Jaime), Emily Austin, Joachim Austin, Claire Grogan, and Trevor Grogan; great-grandson Zander Brown; family friend Linda Jones; and many nieces and nephews. Visitation will be on Friday, August 13 from 5:30 to 6:30 p.m. followed by a funeral service at Spring Grove Funeral Home, 4389 Spring Grove Avenue, Cincinnati, Ohio. Interment will be on Saturday, August 14 at Spring Grove Cemetery, Cincinnati. Those wishing to attend should line up by 9:00 a.m. in front of the funeral home to join the procession to the grave site. Donations may be made to The Tenth Life Animal Shelter in Beavercreek, Ohio at http://www.thetenthlife.org/Donate.html.