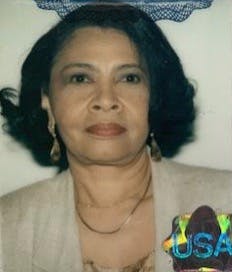 Carolyn Lester Henderson Floyd was born in Evergreen, Alabama on February 9, 1934; the second of four children to bless the union of the late George Leon Henderson and Ethel Evelyn Bryer Henderson.

As a child, Carolyn grew up in Cincinnati, Ohio and attended Harriet Beecher Stowe School where she played the violin and was a majorette. She graduated from Withrow High School in 1952 where she was an Ivyette. Additionally, she was an active member of Carmel Presbyterian Church for many years.

She met her would be husband at a dance, following the Korean War and in time, married Robert (Bob) Anthony Floyd of Cincinnati, Ohio, September 6, 1958.

Once married, Carolyn and Robert moved to Washington, D.C. and had various experiences concerning the Civil Rights Movement by attending planning meetings and the "March on Washington" in 1963; hearing first hand Martin Luther King's "I Have A Dream" speech. As a couple, they returned to Cincinnati, Ohio in 1966 to be close to family and settle down to begin their own family. Carolyn decided to leave her job as a hospital nurse to be a homemaker for her family and her daughters Dr. Robyn A. Floyd and Trina J. Floyd. Additionally, she was a parent advisor for the Cincinnati Chapter of Jack and Jill, Inc. for fourteen years; a Girl Scout Troop Leader; a member of Les Amies, a group started by Carolyn and her friends; and a participant member with the Kennedy Heights Senior Club.

Always positive, supportive and encouraging...always wise and kind...and most proud of her daughters and family at large. Carolyn was an avid philanthropist and enjoyed attending benefit luncheons and fundraisers for various charitable organizations. She loved sewing, gardening, music, dancing, traveling, spending quality time with family and friends; while taking care of her mother and grandmother, always willing to sacrifice her own needs for the good of her family.

She was a selfless, altruistic wife, mother and good friend who always had a smile with words of support and inspiration. She was a joy and inspiration to those she touched. Carolyn had a quiet strength, and would gladly share her good fortune with others, she was a realist, and always maintained a positive outlook in life.

We will miss her dearly...all of us have been blessed because Mrs. Carolyn L. Henderson Floyd touched our lives in so many ways.