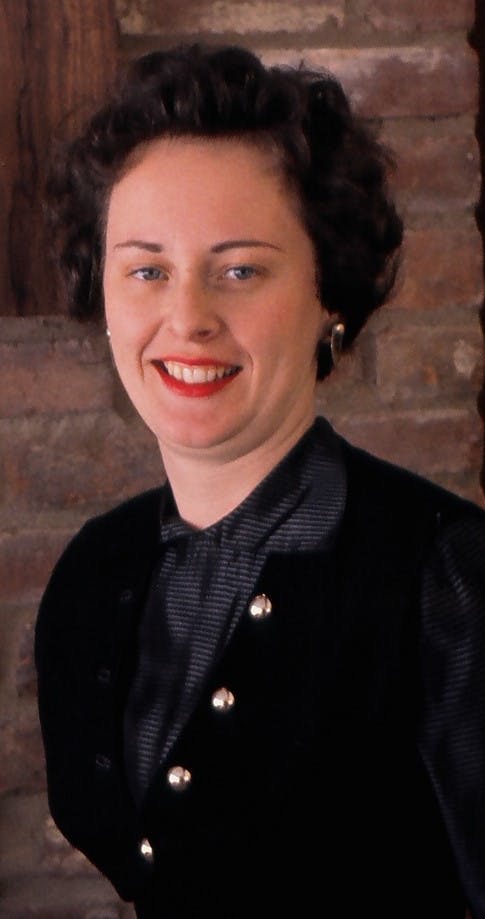 Born 1930, only child to Henry Robertson & Florence Johnson in Rice Lake, WI died, November 10th, 2020. Husband, Allan Beach, the love of her life and best friend from her 1st year at University of Wisconsin to their 65-year marriage, 1952-2017. Allan died at 90, one month after their anniversary. A loving mother and grandmother she leave’s behind, Addison (Tina), Andrew (Denise), Alison Baty (Brian); four grandchildren-Allan J Beach, Ted Beach, Alex Baty (Victoria), Belinda Baty, and 4 great granddaughters. Anita was a child of the Great Depression 1929-’38 and Greatest Generation WW2.

Anita was known for her art talent, fine memory, and was her H.S Salutatorian. Her 1st year at U.WI. her Father had a severe coronary, limiting her finances. With two academic scholarships, she still needed to work at Liz Water’s dorm kitchen but managed to graduate Cum Laude, with a BS in Art Education History. Anita was offered a free MA in Art when her Serigraph was jury picked out of 1200 and purchased by the US Library of Congress, Wash. DC. 1952. Voted President of Sigma Lambda (professional art sorority), she had three other large university shows (a lithograph and two serigraphs were voted best of show) and was listed in her hometown newspaper. All of this occurred in the last month of school.

As an only child her parents did not praise her, in fear she would become spoiled. Allan gave her all she needed. Her professors didn’t know she was engaged. One does not wear a ring when throwing pottery. One of the profs cried, “Oh what a waste of talent”. She knew from her father what kind of life a female artist might lead.

No. It turned out it wasn’t a waste. She was going to make her mark in a big city, teaching art as part of life’s riches. The first year was substituting. Both Allan and Anita loved learning Cincinnati, the history and the lovely surroundings. Anita taught at Walnut Hills High school. She loved the student’s and the love was mutual. Anita and Allan never regretted that they chose Cincinnati. It still had the Midwest values and rich varied history.

They designed their Mid-Century home with a builder, spent vacation’s camping out west with their children, showing America as their parents did for them. In the 60’s Anita found a rare fossil, Edrioasteroid (starfish). A UC. Phd. student sent it to the Smithsonian and one will find Anita’s name on it. Anita and Allan gave their 12-state fossil collection to the University of North Dakota. They also gave their 150-year old Cincinnati bottle collection of beer, soda, and pharmacies to the Cincinnati Museum Center. When asked at her ’88 HS reunion what she had done with her life as they had expected great things from her, she didn’t mention her heart health or her world travels to her Rice Lake classmates. She didn’t like to boast.

Anita never said to anyone she studied painting and serigraphy with Dean Meeker, world renowned serigrapher; John Nartker, Mount Saint Joe; and Art Academy doing 3 dimension weaving with Beverly Semmens, UC. Anita was a life member of Cincinnati Weaver’s Guild and studied steel welded indoor sculpture at Thomas More. One of her oil paintings sold was ‘Spanish Dancers’. It was printed on the cover of a classical record album. She had a number of shows at the 1st Unitarian and Mount Saint Joe giving ½ the price of work sold to these venues. Her 1st oil at U of W was an African American light wt. Olympic boxer- ¾ life size. In the 1950’s nowhere in the USA could it be shown, so she gave it to the Talbert House for auction that still helps young men rehabilitate. It sold to a doctor in Cincinnati. We wish we had taken a photo of it. Anita completed over 100 different pieces. Oil, water, lithograph, serigraphy, pencil, metal sculpture, woven, and macramé and fossil art.

Anita was beset with hyperlipidemia and was afraid of dieing young like her father with a massive heart attack at 55. She looked healthy. Routine exam Doctors at Christ Hospital told her she didn’t have long to live. Art work was shelved. Her children and Allan were always 1st, but there was HOPE!! UC Medical School joined an NIH study. Blood cleansing and testing meds including statins over 20 years helped keep her alive before statins finally brought it under control and allowed her to live a long life. Time and circumstance threw some bad wrenches. This was mitigated by travel, in country and out. As Mark Twain said: “Travel broadens one”.

Al and Anita have traveled to all 52 states, most of the national parks, many wildlife preserves, 65 countries - many “Road Scholar” trips and all 7 continents. They saw the whole of human existence by air, sea and land. Allan worked 70’s -80’s in Europe, taking her yearly before school was out. With Tenting and B&B’s, the Michelin guided them on what and where to visit and stay. They did her roots in Norway/Sweden, meeting cousins. Then tiring of castles and lack of wildlife, and growing up with the clean air of Wisconsin, they wanted more nature. They started a long exploration of Africa and many other parts of the world with his and hers cameras. Sharing their photography at the Nature center, Audubon meetings, and some retirement groups long before Al’s retirement.

In 1968 they bought a larger home within Finneytown with a pool for the kids and to entertain. They loved it so much they lived out their lives there. From this home they did many activities with family: Dry Dredgers, Girl & Boy Scouts, Finneytown Soccer & Music Parents. 1976-96 dealing collector stamps (A & A Stamp Co.), Audubon, Scientific Travel with the International Crane Foundation in Baraboo WI, Cincinnati Zoo, 50 years supporting PEO. Helped 7 geology students attain Phds, 50 seasons attending and supporting Cincinnati Symphony, Art Museum, 66 years with 1st Unitarian Church.

As a teacher who learned and remembered, she said, “Fossil fuel must take a back seat. We Americans have used our planet for good and bad. Americans must join and help all nations to save the planet God gave us.

Andrea Evans was mom and dad’s longtime caregiver and was with Anita when she passed. Andrea was the best. She was the most dedicated and compassionate of any caregiver and was a friend to both Allan and Anita. Anita lived the last year of her life under Hospice guidance with the help of several caregivers. Much thanks to all of them.

No Flowers please. Services will be held at a later date due to Covid. Donations can be made to the Crane Foundation, the Nature Conservancy or Cincinnati Zoo.